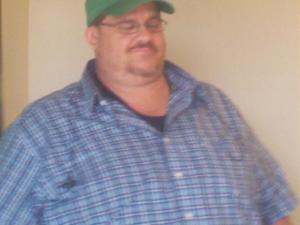 Let me start out by apologizing for the photo. I had to take it quickly while Bubba was sleeping. I'm just kidding. He was awake, but this is what you get when you try to take a photo in a hurry with your camera phone. I guess it's better than no picture at all, right?

All kidding aside, I was at a small auction in Killeen, TX on September 21, 2011 and there were only a handful of people there. For those of you who are unfamiliar with the city of Killeen; it is a medium sized town located next to Fort Hood, which is about 250 miles southwest of Dallas.

Right before the auction, I was in the managers office when I overheard someone claiming they were going to be on Storage Wars Texas. Even though he was wearing sunglasses and a ball cap, I realized that it was Bubba Smith, one of the guys on the show, Storage Wars Unlocked.

As though he was trying to justify his participation in the show.  I'm sure he has received some criticism from the regulars in the Dallas area. Bubba, if you're reading this, nobody blames you for what happened to the storage auction business. The damage was done way before you came along.

Bubba did mention that Storage Wars Texas will premiere in December. When I asked how much they were being compensated per episode, he had no comment.

There were only two units at the auction and the same lady paid retail for both of them. Bubba then left by himself in a 10-12 year old, burgundy Ford F-150. I'm sure he'll be driving a Corvette soon!

Please leave your insightful opinion about this accidental meet with Bubba in the comment box below.