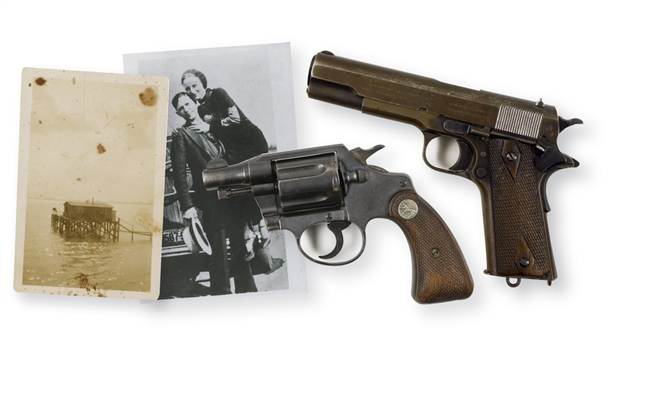 One passion that unifies many auction-hunters is an interest in history. Antiques provide a gateway to the past, and the value they hold is rooted in the richness of their history. Although sentimental value may seem like an odd thing to place a price tag on, historically significant objects can be nearly priceless, and collectors are eager to spend quite a bit of money to obtain them.

That's certainly the case for one anonymous collector from Texas who recently purchased two historical guns at an auction in New Hampshire. The guns – a Colt .45 and snub-nosed .38 special – originally belonged to the famous outlaws Bonnie Parker and Clyde Barrow. These outlaws swept across the nation in a flurry of bank robberies, kidnappings, car thefts and murders before finally being gunned down in 1934. The posse that killed them looted the couple's vehicle, and much of that stolen memorabilia has circulated since among interested collectors.

More than outlaws, Bonnie and Clyde are well-known in modern times for their love story, which was played up in the 1967 film Bonnie & Clyde. Today, the story still resonates with many, and these guns – which were taken from the bodies of the outlaws – provide a tangible link to that era of American history.

Together, the guns sold for an impressive $504,000. They came from the estate of Robert Davis, a memorabilia collector from Waco, Texas. He had originally purchased both guns for about $100,000 in 1986. Several other pieces of Bonnie and Clyde memorabilia sold at the New Hampshire auction, including a $36,000 gold pocket watch and Bonnie's $11,400 silk stockings.