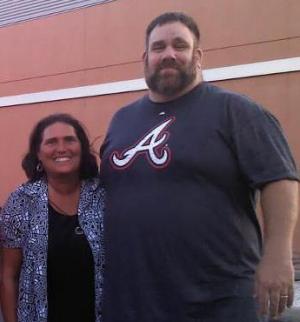 Back in August, you probably heard about the Pensacola storage unit that its former owner, a medical examiner, had left filled with body parts. Although the headline made national news, no one had stopped to get the buyer's side of the story – until now. I had the chance to talk with Philip Knight, the Florida auction hunter who was part of this grisly tale.

At 6'8” and 420 pounds, Philip – or, as his friends call him, Clay – is an imposing figure. A former sheriff's deputy and retired sergeant with the Florida Dept of corrections, Philip developed an interest in storage auctions after watching shows like American Pickers, Barter Kings and – his favorite – Auction Hunters. He's always liked buying, selling, picking and trading, and his retirement seemed like the perfect time to finally pursue those interests.

His first auction turned out to be a bust. Not to be deterred, he decided to give it a second chance, and headed 150 miles to Pensacola to try a few auctions going on there. The first auction he won was full of furniture. Philip was willing to call it a day after that, but his wife urged him to visit the next auction, at a Uncle Bob's storage facility, to see what else they could find.

After eight auctions of regular units, the facility moved to cutting the locks on two climate-controlled units. The first contained synthetic marijuana and bidding was quickly shut down. The other – although no one knew it yet – contained human remains collected by a retired medical examiner.

Of course, that's not what Philip Knight saw when he placed his bid. From the brief glance he got into the unit before the auction started, he made out several nice pieces: a glass-top table, some nice curio cabinets, a gargoyle statue and a new landmower. He placed a winning bid of $900, totaling $1,058 after fees, and set to the task of clearing the items out of the unit.

It wasn't until his wife, Lana, started sifting through the boxes that they realized something was strange about the unit. Inside the first cardboard box was a Gladware bowl containing formaldehyde and a human tongue. Other boxes contained numerous more containers filled with ears, livers and brains. Some were stored in plastic storage containers, but others were in plastic bags and even one Styrofoam cup.

Knowing that the unit had once belonged to a medical examiner, Philip suspected that the body parts might have been preserved for research purposes, but the contents of the boxes still made him uneasy. He explained the situation to the storage facility, which refunded his cleaning deposit, and he and his wife left with the items they had salvaged from the unit.

That was the last Philip heard about the situation until a friend called to ask about the story, which he had seen on the news. He was surprised to hear that the incident was a national news story. Philip has expressed his sympathy to the families who had to be notified about the discovery and who would now have bad memories attached to the situation.

“No body parts in this one, so we're good!”
Fortunately, Philip and his wife got to keep everything else they had won in the auction, so the money spent won't be going to waste. They're holding onto the merchandise for a while in case collectors take an interest in it. He's also requested that he get to keep the medical examiner's badge as a memento after the investigation is over.

I asked him whether this experience had turned him off to the storage auction business, and he said definitely not – as long as he doesn't find any more body parts! He told me that his wife dove right in to opening boxes at the next auction he won, and announced, “No body parts in this one, so we're good!” He's bought several more units since the incident, and he's enjoying his new career as a storage auction hunter.