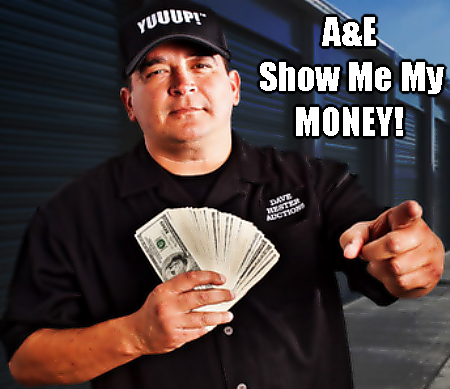 The former ex-villain of the reality television series wins the second round in this now 10-month lawsuit saga against the network.

First round, the former reality star was ordered by the judge to pay $122,692 for A&E’s legal fees for the anti-SLAPP motion he filed against the production company. OUCH! Sure, let him just get out his wallet and pay in tens and twenties, like for the next twenty years.

Second round, A&E’s argument fell flat in the courtroom:

The judge emphasized that the dispute between the reality star and the television executives remains as an “employment dispute.” Dave Hester was set to rake in $25,000-per-episode for the 26 episodes of the fourth season of the show before he was fired.

Judge says the argument ignores the fact that Hester doesn't need to "prove" an actual violation to prevail on his wrongful termination claim. Sort of strange considering California is a no-fault state, which means an employer can just fire you in a *snap.*

However, Dave was fired for reporting "reasonably based suspicions."

What were these reasonably based suspicions or illegal conducts by A&E and Original Productions, you ponder?

Dave Hester claims A&E fired him off the show in retaliation just days after he complained about the staged scenes by the executives. Here is how he claims the show was rigged:

"Whether Plaintiff’s suspicions were reasonably based and made in good faith are factual questions that cannot be decided on demurrer."

"Plaintiff’s claim for punitive damages contains sufficient factual allegations. Whether or not Plaintiff can prove his allegations is not the function of a motion to strike."

Now Dave Hester is now suing to recover the money he would have made during season four had he not been fired. He seeks $750,000 in general damages and will ask for more in punitive damages against the two production companies. That could add up to millions of dollars! Guess what? The judge isn't ruling it out.

Who will win the final round?

Please give us your opinions of this ongoing lawsuit in the comment box below.